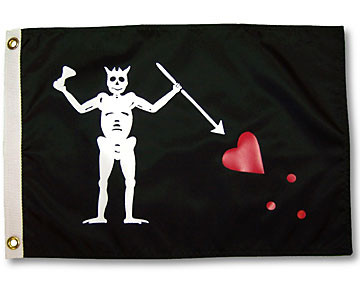 Edward Teach (Blackbeard) 3' X 5'   These are high quality pirate flags. They are Outdoor quality- screen printed.  The flags listed here are double sided (two pieces of nylon) and silk screened on both sides.   Edward "Blackbeard" Teach was undoubtedly was one the most feared and most despised pirates of all time. Edward Teach is thought to have lived in England before his pirate career, although his exact origins are unknown. He was named "Blackbeard", for his large black beard that almost covered his entire face. To strike terror in the hearts of his enemies Blackbeard would weave hemp into his hair, and light it during battle. Edward Teach was an unusually large man, carrying two swords, numerous knives, and pistols- he was feared by his own crew. At the sight of this pirate, many of his victims were quick to surrender without a fight. If they did, he would often times just take their valuables, rum, and weapons— allowing them to sail away. However, if the vessel resisted capture, he would either kill the crew, or maroon them. Blackbeard needed to maintain his devilish image in order to maintain the respect of his crew (very few members of the crew doubted that he was the devil himself, very few didn’t fear him, and therefore they obeyed him). Blackbeard began his pirating career sometime after 1713, as an ordinary crewmember aboard a Jamaican sloop commanded by the pirate Benjamin Hornigold. In 1716, Hornigold supplied Teach with a small crew, and a small captured vessel to command. By 1717 Hornigold and Teach were sailing in alliance, and together were feared throughout the seas. In November 1717, Hornigold and Teach were able to capture a 26 gun French vessel called the Concorde (recent research has shown that the vessel had originally been built in Great Britain). Blackbeard’s pirate partner, Hornigold, decided to take advantage of a recent offer of general amnesty from the British Crown- and retire in comfort. Teach rejected the offer and resolved to convert the captured French vessel Concorde into his flagship. Teach increased her armament to 40 guns, and re-named her the Queen Anne's Revenge. Soon Teach and the Queen Anne's Revenge met another pirate vessel. She was the ten-gun pirate sloop Revenge from Barbados, commanded by Stede Bonnet. Soon after agreeing to sail together, Blackbeard thought that Bonnet was a poor leader and an incompetent sailor. He promptly appointed a different pirate to command the Revenge, and made Bonnet a "guest" aboard the Queen Anne's Revenge , where he remained until the ship finally wrecked six months later. In the winter of 1717-1718, Blackeard sailed the Caribbean with his two ships. While plundering vessels, Teach decided to add two more captured vessels to his group of pirating watercraft. in the Spring of 1718 Blackbeard was in command of four pirate ships, and well over 300 pirates. In late May, Blackbeard’s flagship was lost at Beaufort Inlet, and a smaller vessel of his fleet was lost that same day while trying to assist the stranded Queen Anne's Revenge . Before leaving Beaufort Inlet, Blackbeard left twenty-five members of his crew on a deserted rocky ledge, and stripped the Revenge of her provisions. Stede Bonnet helped the marooned men, and in return they agreed to obey his commands. Together with his crew, Bonnet resumed his lawless ways aboard the Revenge, which he re-named the Royal James. Meanwhile, Teach and his crew had sailed to Bath, and then to the capital of North Carolina, where Governor Charles Eden pardoned them. Blackbeard; however, did not stop his pirate habits, and continued to take ships after the period of amnesty had expired. A government official spotted him and thus a fleet of Royal Navy ships surprised Blackbeard at Ocracoke Inlet on November 22, 1718, where he was killed. Although it was a short battle, it was one of the most bloody in Blackbeard’s pirating career. Before he fell, he had a reported 5 bullet wounds and more than twenty sword cuts before dying. As a show of victory, the Royal Navy captain decapitated Blackbeard, and hung his head on the ships rigging. Blackbeard had captured over 40 ships during his piratical career, and had been the cause of the deaths of hundreds of people. Although Blackbeard's lawless career lasted only a few years, his fearsome reputation has long outlived him.